With all the acquisitions made this off season the Braves still have two voids to fill in the outfield. Jeff Francoeur seems to be entrenched in right field for at least the 2009 season which leaves two spots open. Atlanta has shown interest in both Nick Swisher and Xavier Nady, though Swisher appears to be the favorite.

Nady is the superior player both offensive and defensively but Swisher would come at a bigger discount. Nady also happens to be a Scott Boras client and will hit free agency after the 2009 season. Jason Heyward could be Nady’s replacement in the likely hood that he departs, but there is no guarantee that he will be ready in time.

Heyward is already a tremendous talent but Atlanta does not in anyway want to rush him. He has been invited to this year’s spring training but is not expected to make the roster.

Atlanta’s beat writer Mark Bowman has said that the Orlando Hudson idea died about a month ago. Atlanta let the idea go over defensive worries. I don’t really buy that idea as before last year he won consecutive Gold Glove awards. Hudson was also injured for part of last year so that may have effected his range factor, which has provided concerns for Atlanta. The signing of Hudson could have made Kelly Johnson expendable and led to a possible trade for Ryan Ludwick. 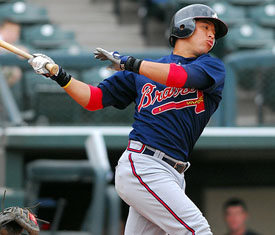 I would like a trade for Swisher if Atlanta didn’t need to include too much value. It would take less to land Swisher than Nady, but Swisher is also under contract for $22.5MM over the next 3 seasons. Swisher had a down year last year but did hit 24 home runs. Swisher is also a switch hitter which gives him a lot of value to the Braves.

If Atlanta can’t land Swisher it looks like Matt Diaz, Brandon Jones and Gregor Blanco could be battling for the spot in left field. Center field is also up for grabs with Blanco, Josh Anderson and Jordan Schafer all fighting for the spot.

When this is all said and done I think Atlanta can land Swisher and that Jordan Schafer will win the starting spot in center field. Schafer is just as good defensively as Anderson and Blanco but can provide more offense. Atlanta was in desperate need of offensive production from the outfield last year and Schafer is the most likely to provide it out of the three.