First off, I would like to congratulate Senator Obama
on his victory the other night. Whether you wanted him to win or not,
he is our president.
I simply wanted to give him the congrats he deserved, this will not
turn into a political flame fest. So don’t even think about it.

Back to baseball. It looks like Greg Maddux is going to retire. All you
can really say is thank you. Thank you for the great years and a World
Series. Maddux was an amazing pitcher that deserves nothing but the
best.

Not only was he an amazing player, he was a wonderful
person. It seemed that the only players that disliked him were the
opposing batters. But honestly, how can you hate Maddux, he is Greg
freaking Maddux. 1st ballot Hall of Famer, no contest. He should be
inducted today just because he is that good.

I don’t think
Glavine is to far behind Maddux. He just can’t contribute the way he
used to. It is just reality. You cannot deny the obvious. Thank you for
the great years and WS. He is also a 1st ballot Hall of
Famer.

I almost hope that Smoltz hangs it up just so the trio can all be
inducted together. That would be simply amazing. One of the greatest
days in the history of baseball. If he doesn’t hang up his cleats I
would like to see him in the Atlanta bullpen.

There are a few more rumors going around the site. The biggest one is
still Jake Peavy. Everything is at a standstill for now. We will see
how it is going in about a week or so. I still believe if Peavy doesn’t
end up in Atlanta he will stay in San Diego.

A big trade that has just surfaced in the past few days is Kelly
Johnson for Ryan Ludwick. Eh, not really a bad trade. I’m not really
loving it though. Ludwick did hit 37 homers last year, but it almost
seems like a fluke. The problem with Ludwick is he strikes out a ton,
and yes, even more than Francoeur. You thought you were mad that
Frenchy went down 100+ times, wait till Ludwick shows up. It could be like having Andruw Jones back, but in left field. Oh no, we don’t
want that now do we. Also he won’t make the plays Druw did defensively.

Could Francoeur be traded? Well, yes. The Royals love him with a
passion. I don’t know why, but they do. Atlanta wants Zack Grienke in
return but the Royals apparently are smarter than we first expected.
Doesn’t look like they are going for it so I don’t see Francoeur moving
anytime soon. I think he still deserves another chance. After all he is
“the natural.” So I hear.

To cap off this entry, and just for giggles… Philly fans you know you laughed so don’t deny it. 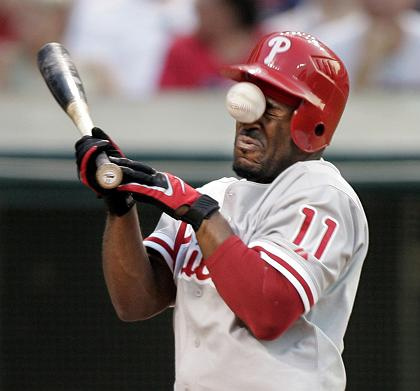