My Pittsburgh Steelers are in the playoffs. They have clinched but now the question is, how far can they go?

We all know about the Steelers’ top notch defense. James Harrison and LaMarr Woodley wreak havoc off the edges while Troy Polamalu roams the secondary. This is great and all but I am legitimately worried about the offense. I know they have had a murderers row of a schedule, but they need to put up points to win ball games. 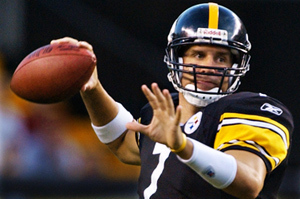 They have just slipped by on several occasions and they can’t keep winning like that. It won’t be like that in the playoffs. Everyone elevates their game in the playoffs so I expect the Steelers to also. Ben Roethlisberger can only lead his team on so many game winning drives before he fails. He is a great quarterback under pressure but it can only last so long.

This week is the true test. Pittsburgh will travel into Tennessee to take on the 12-2 Titans. This game can determine home field advantage throughout the playoffs. I think it is a must win for the Steelers. Locking up Heinz field throughout the playoffs would be huge. They play great at home, which is exactly where they need to be.

I really think the Steelers can win this game. I don’t think Kerry Collins will be able to handle Pittsburgh’s defense. Like they said on the pre-game show on ESPN, you can’t run against Baltimore’s defense, you can’t breath against Pittsburgh’s defense. Albert Haynesworth and Kyle Vanden Bosch will also be inactive for the game. This gives the Steelers an advantage. Those two guys were the two biggest pieces in the chain that is the Titan’s defensive line.

The Steeler defense will suffocate Kerry Collins and hopefully Big Ben can pull some tricks out of his bag and score 20 or so points. This is by far the biggest game of the season for Pittsburgh. It may not keep them out of the playoffs, but it could very well be an AFC Championship game preview. If all goes well I believe Pittsburgh can ride this win all the way to the big time, Super Bowl XLIII. If not, there is always next year. But who wants to wait another year?